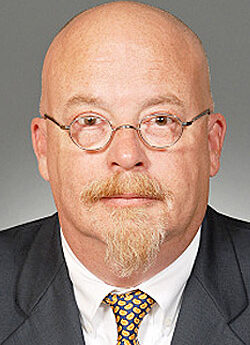 Over his 30+-year career, Attorney David J. Harth has become known as an outstanding trial lawyer based upon his patent litigation work. But while carrying a full load of billable work hours, David has also made a consistent commitment to handle significant cases for nonpaying clients who would otherwise have not been able to obtain quality representation.

David has spent hundreds of hours each year during the past couple of decades representing prisoners in section 1983 civil litigation, primarily in the Western District of Wisconsin. During that time, he has chaired the Pro Bono Committee of the Western District Bar Association, and in that capacity has worked hard to obtain representation for other prisoners having civil complaints in need of redress.

In one such challenging and time-consuming case, David has represented a Georgia inmate on death row seeking to overturn his conviction on the grounds of inadequate representation. Also, he successfully represented those seeking an injunction prohibiting the Barron Area School District from removing gay-themed books from a high school library. For this extraordinary effort, he received the William Gorham Rice Civil Libertarian Award in 1999.

In another noteworthy pro bono effort, David joined with several partners in his firm to represent Senators McCain and Feingold in a multi-year defense of the constitutionality of the bipartisan campaign reform act of 2002. As a result of their efforts, the law was upheld by the United States Supreme Court in December of 2003.

Perhaps more impressive than David’s commitment to pro bono work and social justice is his mentoring of dozens of young associates, all of whom learn quickly that pro bono work is not simply “encouraged,” it is an important part of professional ethics and development. He has created an environment where pro bono hours are weighed equally with billable hours. In so doing, David’s views on the importance of pro bono work are being passed down to another generation of attorneys, each of whom will continue to perpetuate David’s legacy long after he retires from the practice.

Attorney David Harth is a 1979 graduate of the University of Wisconsin Law School. He is a retired partner with the law firm of Perkins Coie LLP.