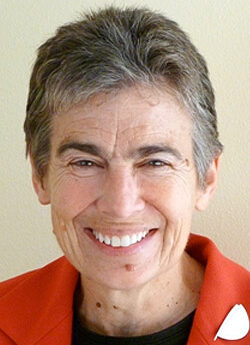 Joan Karan has been the Assistant Director at Disability Rights Wisconsin since 1983. She oversees DRW’s finances, benefits program, personnel matters, landlord relations and development. She is also known to DRW’s 65 staff as the “Go To” person for a wide variety of work-related and personal issues. Her personal commitment to excellence in all aspects of DRW administration is widely acknowledged within the agency as a major reason that DRW is a great place to work, where many employees come and stay for 15 – 20 years or more. Joan is passionate not only about disability rights, but also about diversity and cultural competency. She has been instrumental in making DRW a more racially diverse workplace and strengthening DRW’s response to minority clients.

Joan was also the creator of DRW’s Violence against Women with Disabilities program, which began in 2002 and has received national recognition. She has overseen the program since its inception and has been actively engaged in its operations, resulting in many local sexual assault and domestic violence programs improving their service capacity and accessibility for women with disabilities.

Joan is also a community leader. She has served on the Board of Community Shares of Wisconsin for several years, including serving as Board President in 2008 and 2009. CSW is the oldest social action fund in the country, with 39 years of experience connecting donors with 64 grassroots, nonprofit organizations working on progressive causes.

Joan is a graduate of UW Madison. Prior to coming to DRW she was the Executive Director of Domestic Abuse Intervention Services, and later Arc of Dane County.