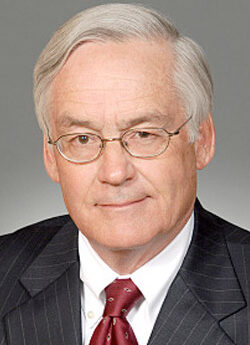 Mr. Skilton, a 1969 graduate of the University of Wisconsin Law School, has worked for nearly 40 years as a trial attorney in the commercial, antitrust, and intellectual property areas.

In September 1994, Mr. Skilton formed a statewide cooperative effort to address the changing financial needs of Wisconsin’s civil legal services programs, called the Commission on the Delivery of Legal Services. Part of the commission’s recommendation included creating the Equal Justice Coalition, now the Wisconsin Equal Justice Fund. Mr. Skilton served as President of the Board of Directors from 1996 to 2000, overseeing WEJF’s initial campaign which raised $1.2 million for our member programs.

John Ebbott, Executive Director of Legal Action of Wisconsin, said of Mr. Skilton, “John has raised thousands of dollars from his own law firm and from other attorneys. He has advocated in the halls of Congress for increased funding for legal services. He has cultivated relationships with our state’s key policymakers. John has been an unbelievable force for equal justice.”