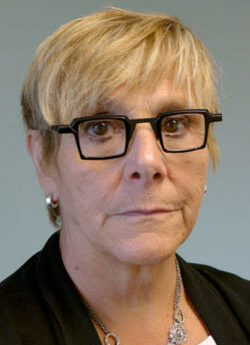 After receiving a journalism degree from the University of Wisconsin-Madison and a Masters Degree in Communication from University of Washington, Kit Kerschensteiner embarked on a career in advertising. She worked for several advertising agencies in Chicago before realizing that she “really didn’t fit into the world of conspicuous consumption.” In a move that would later prove to be quite fortuitous for Wisconsin’s protection and advocacy movement, Kit decided to pursue a law degree.

In 1985, Kit came across an advertisement for a staff attorney position at a small Chicago disability rights organization she had never heard of. It turned out to be the new Protection and Advocacy System for the state of Illinois (now known as Equip for Equality). While at Equip for Equality she filed what turned out to be the first federal law suit under Title II of the ADA only a few weeks after its effective date (which was eventually successfully settled before trial). She would continue to work in the protection and advocacy field for the next 28 years and counting.

In 1997, she joined the Madison office of Disability Rights Wisconsin (known then as Wisconsin Coalition for Advocacy). Through the years, Kit has engaged in many types of advocacy, including individual client advocacy, impact litigation, appellate advocacy, and systems reform.

Although she advocates for the civil and human rights of people with all disabilities, her personal emphasis is on mental health law and policy. In her time at DRW she has successfully undertaken a number of federal civil rights actions on behalf of institutionalized persons and participated as amicus in appellate and Supreme Court cases containing important issues for people with disabilities. Kit has also been involved in several DRW investigative reports of abuse and neglect situations that have had significant impact on conditions in both community and institutional settings.

Kit became Managing Attorney of DRW’s Madison office in 1999, and considers herself privileged to work with a team of talented attorneys and advocates. After 28 years of work in the protection and advocacy field, Kit continues to find inspiration in the courage of the clients and self-advocates she has met along the way.