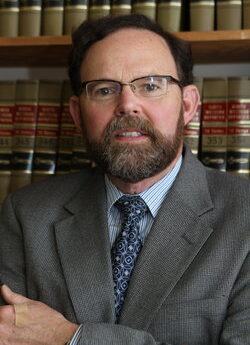 Michael Maher began his career in civil legal services in 1985 when he took on the duties of the firm administrator at Legal Action. He has dedicated his career to making sure that the support resources are in place so that Legal Action’s dedicated staff can focus on the delivery of client services without worrying about the day-to-day administrative details of the firm.

Michael graduated from the University of Illinois–Springfield (UIS) with an environmental biology degree in 1976 and subsequently received a Master in Public Administration in 1982 from UIS. He worked seven years at the Illinois Environmental Protection Agency in the water quality planning unit and on the team handling the financial management of the water pollution control division. Before starting at Legal Action, Michael took a year off, during which he worked as a seasonal park ranger leading cave tours at Great Basin National Park in Nevada and a summer as a fire protection officer in the Sawtooth National Forest in Idaho.

When Michael started 32 years ago, Legal Action had 3 offices serving 11 Wisconsin counties, 50 staff, and a budget of $2.2 million. Michael now directs the fiscal and administrative operations of a firm with 6 offices serving 39 WI counties, 120 employees and an annual budget of $10.6 million. During Michael’s tenure, the firm’s technology resources have grown from one desk-top “Osborne” computer to firm-wide integrated technology systems which are critical to the delivery of high quality legal services to the firm’s clients.