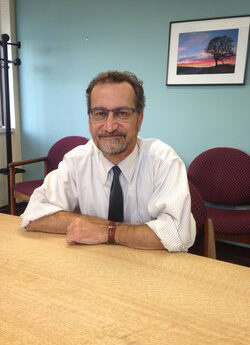 Mitchell Hagopian has devoted his entire legal career to helping and representing economically disadvantaged and other traditionally unrepresented people. Since March of 2001 he has worked for Disability Rights Wisconsin (DRW) where he advocates on behalf of people with developmental and other disabilities.

For the nine years prior to coming to DRW, he was the leader of the team of lawyers at the Elder Law Center that provided legal back-up to the elderly Benefit Specialist program. A 1981 graduate of the University of Illinois and 1985 graduate of the University of Wisconsin Law School, he has also worked at Western Wisconsin Legal Services in Dodgeville, the civil legal services provider for indigent people in western Wisconsin at that time (1985-1989) and the Center for Public Representation (1989-1991).

In the course of his work he has trained hundreds of lay advocates and attorneys in the nuances of public benefits programs that help the poor, elderly and people with disabilities. In more recent years, his practice has expanded to include protective services issues. Throughout his career he has been privileged to work with colleagues who are talented, dedicated and funny. The clients he represents have poignant stories to tell and are always worth fighting for.

In 2001 Mitch argued (unsuccessfully) before the U.S. Supreme Court on behalf of Medicaid recipient Irene Blumer in WDHFS v. Blumer. In 2002 he argued (successfully) on behalf of Judy K. before the Wisconsin Supreme Court in Judy K. v. Dunn County, the case that established a county’s duty under Chapter 55 to “find and fund” appropriate community placements. So he is one for two in big cases. He remains irritated by the Blumer decision.

As Mitch likes to say, he has never charged his clients a penny for his services, and he is confident that almost all of them have gotten their money’s worth.

Mitch is married to Suzanne Hagopian, and they have two daughters, Annie and Natalie—neither of whom are currently interested in becoming lawyers. The family dotes on one dog, Roxy, two cats, Eddie and Yoshi, and two horses, Willy and Gracie. In his spare time, Mitch fences poorly, plays 2nd fiddle in a string quartet, and trumpet in the neighborhood walking band.